In July 2011 the first voucher scheme for members with chronic disease took off in the urban slums. It is for Diabetic members who face relatively high prescription costs and who are poor. MoPoTsyo’s membership database makes it possible to track their adherence over time to the prescribed medication.

The voucher system is meant to help create a meaningful cycle of care, so the benefit package contains much more than just a discount on pharmaceuticals for people with chronic disease. The 5 urban Peer Educators distributed 3 vouchers to every one of the 55 poor diabetics in 5 slum areas.

During 3 consecutive months, these 3 vouchers help these registered members purchase their prescription drugs monthly at one of the two private pharmacies contracted by MoPoTsyo in urban Phnom Penh. These two sell medicines from MoPoTsyo’s Revolving Drug Fund exclusively to MoPoTsyo’s members at fixed prices. The voucher holders can use 3 vouchers at once to buy a 3 months stock or they can use the voucher month by month. In great majority of cases the voucher covers 50% of their monthly prescription drug costs, but in some cases the assistance is as high as 80%. The Peer Educator must meet with the patient personally in order to hand over the vouchers because that creates the opportunity to check blood sugar, blood pressure, weigh, check the records in the self-management book and talk as trained patient to patient. All Peer Educators have diabetes themselves and can help other patients improve their knowledge and self-management skills.

The first group of beneficiaries of these vouchers was already receiving financial assistance from MoPoTsyo’s own equity fund but that system was “cash based” so not suitable scaling-up. With this new voucher system we contribute to the design of comprehensive “social health protection” for chronic patients. That is in this case preventing catastrophic health expenditure related to chronic illness and prevention of secondary complications. Cambodia has already specific policy for health equity fund and vouchers but only for acute illness and symptomatic treatment. This voucher system is the first for a “continuum of care” as the retail price of prescription drugs has been loaded with the costs of the continuum of care.

During these first 3 months, Ministry of Health officials and MoPoTsyo monitor how it works. Then, if the system works satisfactorily, we will expand it to other provinces during Quarter 4 of 2011 to get experience with the system in rural areas. The right level of subsidy must be determined. Benefits can be added and it can be linked with other programs that make benefits available for vulnerable groups. After all, more than two thirds of our members are women and among them 40% is in the fertile age group. But there are also ideas to provide TB screening to this group or special subsidies to help prevent blindness.

5- year document experience
Encouraged by the Alliance for Health Policy and Systems Research, we began to document the first 5 years of experience with the Peer Educator Networks for Diabetes and High Blood Pressure over the period 2005 – 2010 resulting in a 150 page document, which can be downloaded here.

The document helps also to create an evidence base for a Policy Brief that contains MoPoTsyo’s advice on how to proceed with the PEN and how they can best be framed and as part of Cambodia’s national response to emerging threat from chronic NCD. The Policy Brief is available in English and in Khmer versions. This is the start of a process of integration into the primary care system, more in particular the Operational District which runs Cambodia’s public primary care system. With official integration the road opens to create functional vertical and horizontal linkages that are needed for the PEN’s proper governance and supervision. The opening of an office inside the Provincial Health Department in Takeo is also an important step into the same direction as the PHD will have to carve out a role for itself in the supervision of the OD’s in how they deal with the PEN;s. For the moment, the PEN’s are reporting based on 25 standard progress indicators that together create a picture of the activity and achievements in each health center coverage area but also a summary per OD and a summary per province and also a summary for the whole country, that is from OD’s where the activities are implemented so far.

Alliance news Letter
MoPoTsyo has also begun to make a modest contribution to the Access To Medicines (ATM) policy research program of the Alliance for Health Policy and Systems Research see Alliance news letter 21 with 2 abstracts accepted at the ICIUM conference (November 2011). Although we are not a real research organisation our data can help create better insight in what works for chronic patients suffering from chronic NCD in low income countries.

Bernadette Thomas Nephrologist
A Senior Nephrology Fellow from the University of Washington Medical Center was introduced to the urban Peer Educator Network in July 2011 by Prof Jim Logerfo, from the same University. With the intervention’s improvements in blood sugar and blood pressure there is opportunity to delay and prevent Chronic Kidney Disease among many of MoPoTsyo’s members. We have to learn more about the extent of the problem and our impact on itthrough the appropriate indicators. It is wonderful that they are going to advise us how to get a better handle on this issue and on hypertension in general. 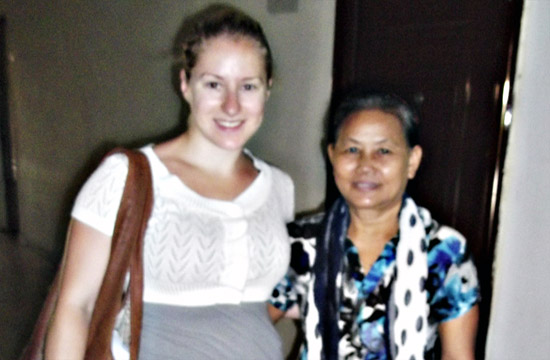 A Canadian biochemist-anthropologist worked as volunteer with MoPoTsyo for six weeks to help us monitor the use of our laboratory services and in particular the use of the urine glucose strip. Results will be available in September this year.

Spotlight on Kompong Speu Province, Kong Pisey OD
In 2009, the Australian government in Canberra contracted MoPoTsyo to set up its 8th Peer Educator Network. Kong Pisey Operational District in Kompong Speu province had been chosen because it borders Ang Roka OD in Takeo with a mature OD, which makes it easy to replicate. About a year later there are significant results to report.

WHO-Worldbank NCD Delegation report
In April this year, the PEN in Kong Pisey OD was visited by a heavy international WHO-World Bank Delegation whose members were on their way to Moscow to join in the first Interministerial Conference on Chronic NCD, to prepare for the UN Summit on Chronic NCD later this year. The visit made a positive impact on the Delegates as can be read in the mission’s report, which can be downloaded here. The World Bank also recommends the Cambodian government to use peer education and self management in primary care with community involvement. Exactly how peer education and self-management can best be integrated into primary care depends on the local context.

Letter in the Lancet: “……We need to radically rethink our concept of health care to address the rise of non-communicable disease. This shift implies very simple diagnostic and treatment protocols, fewer barriers to essential medicines, greater access to simple monitoring devices, and a move towards true empowerment of patients.” writes Raoul Bermejo III in The Lancet and mentions MoPoTsyo as an example (download).

Wow…..already 3 theses that are available! 1 in Khmer & 2 in English
Cambodian students from different universities and enrolled in various faculties have studied parts of MoPoTsyo. This has produced some interesting robust findings resulting in sound academic achievements and commensurately awarded with great praise and high scores from the referees.

Center of Hope helped us with temporary supply of HCZ to avoid a stock out
Our Hydrochlorothiazide 25 mg arrived too late but our friends from Center of Hope lent us enough to meet the gap for a couple of weeks. In 2010 July it also happened but then with Metformin. It is not easy to expand and estimate the right quantities…

1st destruction of expired drugs
The other side of the same coin is that this year for the first time we organized a destruction of medicines that had expired. It was almost all Propanolol and very little of anything else. We have adopt a transparent administrative and practical process for this activity which can be downloaded here. MoPoTsyo has always had a standard policy of not using expired drugs. Yes it is well known that for certain medication it is no problem to use these beyond the expiry date and also that insulin is among those, but we decided not to do that. We must keep the quantities of drugs that have to be destroyed as small as possible and yet avoid having to borrow from our friends.

Peers For Progress
Among a wealth of information on peer education initiatives all over the world, PFP announced the appearance of the report of the Kuala Lumpur meeting which can be downloaded here.

Capacity Org
The online magazine Capacity.Org dedicated its May 2011 issue to “Health Systems Strengthening” and included an article about the Peer Educator Networks. It can be viewed online at http://www.capacity.org/capacity/opencms/en/topics/health-systems/accessible-care-for-diabetes-in-cambodia.html

Audit 2010
The financial audit of financial 2010 has been completed by our regular Auditing firm Vanda. It will be submitted to MoPoTsyo’s Board at the next board meeting in August 2011. The World Diabetes Foundation (http://www.worlddiabetesfoundation.org) has introduced new audit procedures for which WDF has contracted an international audit firm. So for our WDF09-463 grant the audit 2010 will have to be repeated later on by the international firm.