By channeling this donation via Friends For Life in The Netherlands it becomes possible for Impulsis NL to double these donations. The funds will be used to fund our activities in the urban slums and in Takeo province in order to pay for items for which we have no donor such as incentives for peer educators, equity fund (to help very poor people pay for disease related costs), and medicines to expand our Revolving Drug Fund. Thank you…..Dank je wel …DVN members..! 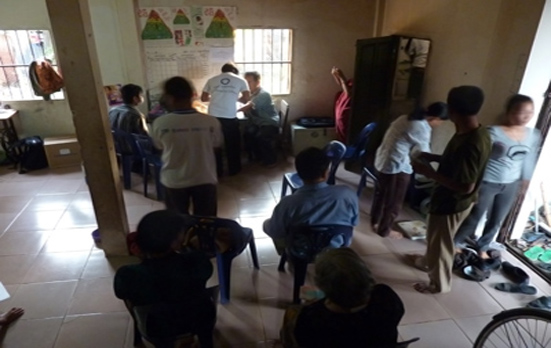 Since diabetes patients must pay all their own health care costs including the travel to and from the location of the service, this means that – just like medicines – many people cannot afford them, which means that their physician cannot take an informed decision about treatment. The prices of laboratory tests in the public service are kept high mainly to generate income for the hospital and also in order to allow the public laboratory staff to continue to make profit from private laboratories they operate outside the official working hours. In connection with this, the quality of laboratory tests available at the thousands of competing laboratories is often questionable because many labs reduce their use of reagent, controls, so they increase their profit margins.

To improve regular access to good quality and more affordable basic tests for its own membership, MoPoTsyo has set up a laboratory service: Twice per year, MoPoTsyo’s members will have the opportunity to give a fasting

venous blood sample at a convenient hour such as between 6 and 7 in the morning at a location close to their village. On the spot, the sample is immediately centrifuged (thanks to small portable centrifuge and portable generator), labeled, put on ice, transported to our lab to be tested. Not just the price per test is relatively low, also the advantage of the new system is that later when the patient goes to meet the physician, both the patient and the peer educator already know what can be expected in terms of change in the prescription or for example a discussion about switching to insulin etc.. For the doctor the lab tests results are available to support the patient examination and help him make a decision without having to wait for results of obviously needed exams and having to ask the patient to come back again. For the moment, we are comparing our own lab-results with reference laboratories in Phnom Penh to check quality. Later this year we will enroll in an international external quality control system. We plan to expand our range from the current 8 blood tests (glucose, creatinin, potassium, cholesterol, HDL, Triglycerides, transaminase, albumin) to include urine tests (microalbuminuria and proteinuria) as well in the near future.

At the end of November, 2009, the ITG (Instituut voor Tropische Geneeskunde), a.k.a. the Institute for Tropical Medicine (ITM) in Antwerp, Belgium, held a 2-day workshop on “Health Systems and Chronic Diseases”.The main objectives were to share experiences from different contexts for an initial situation analysis.

MoPoTsyo participated to share its field experience with Peer Educator Networks. The report of the workshop can be downloaded here. During the workshop it became quite clear that there are not many demand side-interventions involving expert patients comparable to what MoPoTsyo is doing. In the future, we will cooperate with ITG to give it opportunity for critical independent and academic study of different aspects our intervention. We know the intervention works but we do not know very well which factors are determining its effectiveness nor how strong they are. There must remain many things which can be improved in terms of quality, increasing benefit package, efficiency etc.

New programme in Kompong Speu: The health authorities of Kong Pisey OD, in Kompong Speu province (situated between Phnom Penh and Takeo) have asked MoPoTsyo to set up its peer educator network there. The investment is going to be financed by the Australian Government through AUSAID and will start in March 2010. It is the 4th province (after 1. Phnom Penh (2005), 2. Takeo (2007), and 3. Banteay Meanchey (2009) where a Peer Educator Network (P.E.N.) will be set up. This OD in Kompong Speu shares a common border with Ang Roka OD in Takeo, where we had developed our first rural P.E.N. Also it is not so far from Phnom Penh. The candidate peer educators from the new OD will be trained not far from their home.

Thmar Pouk Partnership Project: In December 2009, we received a visit from donor ICCO-KIA to discuss progress of the new project in Banteay Meanchey province, the Thmar Pouk Partnership project. The project partners are 3 NGO’s and government health authorities. We will regularly update the progress in special webpages

On January 19th, 2010 the Thmar Pouk Partnership Project held its inception meeting in Thmar Pouk. The 3 peer educators who passed the exam have found 35 diabetes patients. Consultation is set to start at Thmar Pouk OD in Jan/Feb 2010. The Pre-Identification of Poor Households in Thmar Pouk OD is well on its way to completion.

Evaluation: MoPoTsyo has conducted an evaluation of its urban membership (5 x 19 = 95 randomized members)and its rural membership (14 x 19 = 266 randomized patients), so among 361 of its members who have been in the program for longer than 6 months and who have not dropped out. The participation was again excellent. The atmosphere during evaluations is informal and people like it. 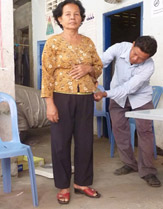 For the first time, we have been using peer educators from one network to interview the randomly selected patients from another network. This way we can cut costs because Peer Educators cost less than external interviewers. This makes our program more sustainable. We also open the evaluation to members who have not been selected through the randomization but who want to pay for the lab assessment to measure their progress. This further helps to recover our costs.

The First National Conference on Non Communicable Diseases was held in Phnom Penh on 8 and 9 December, 2009. The conference was presided over by H.E. Dr Heng Tai Kry, former director of Calmette Hospital who spoke frankly about the stroke that he suffered in 2009. 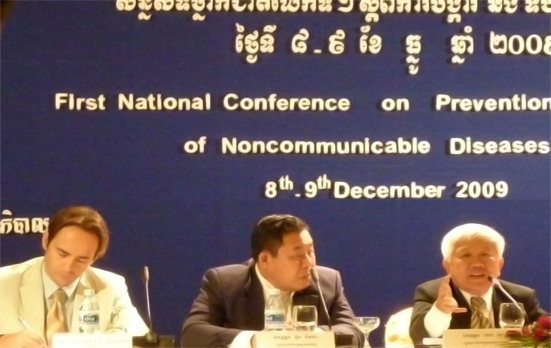 At the conference the MoH launched the Healthy Khmer Food Pyramid, which MoPoTsyo has helped to prepare. Download Picture of food pyramid (.pdf).

On January 15, 2010 in the morning, MoPoTsyo gave a presentation at the Municipal Health Department about its intervention in the urban slums. The presentation can be downloaded here.